I was going to write this yesterday. 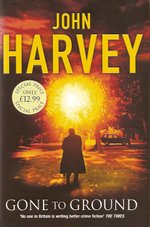 I was going to write this yesterday. I was going to write something like, hurrah! a new John Harvey, he's my favourite English crime writer by a long East Midlands (with the occasional detour to Cornwall) country mile; that's my evening sorted then, but then I remembered that I was down to cook a 3 course (with choices) menu for a dinner party for eleven 13 year old girls, and we like nothing more around these parts than to stick to the facts - versimiliwhatsit or whatever.

So, anyway, I clearly hadn't been paying attention, because as I was sauteing potatoes to accompany chicken fricassee (accompanied by green salad - vegetarian option; lasagne) I said to Justine; so when are they leaving?

And she said, between 10 and 11 (pause) tomorrow morning.

There are days, I tell you, when the yoga comes in very handy; I managed a weak smile.

Then one of the girls said Audrey Hepburn and lit her breadstick from one of the candles in the centre of the table and the next thing all eleven of them were alight and making like Holly Golightly and the kitchen suddenly smelt like a bonfire in a Body Shop factory.

And the less said about the chocolate fountain the better.

Of course, this morning there was nothing for it but to barricade myself in the bedroom and read; but the moment for beginning a new John Harvey had for the time being, past - who, after all, would feel like reading about a grim homosexual murder whilst the house is so full of life and somewhere in the background downstairs a just-teenage voice is asking, er, has anybody seen a black bra? 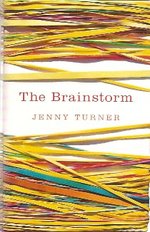 And so instead I settled on The Brainstorm by Jenny Turner, picked out at the shop initially because it has the best designed cover of any novel I have so far seen this year (though the book doesn't actually credit anybody with designing it) secondly, because it was set, at least in part, in south London, and thirdly because it was short and at first glance had the pace and tempo of a Sunday morning read. And blimey, so far it is  very good indeed; a funny story concerning young women politicking and rubbing along in a newspaper office in the 90's that someone cleverer than I might manage to connect and contrast with the lives of the lot downstairs and their innocent Breakfast at Tiffany's fantasies, one of whom has just managed to trail dog-poo throughout the house.

Crikey O'Reilly. I'm going to have to put more effort into my attempts to steer both my grrrls towards the life of the social misfit and loner. We need more clothes shopping in Ukraine, birthday parties at the local Honda dealership, very short hair cuts.
I have chosen several of my favourite books because they had good covers. I noticed today an advert in the paper for "Nature Girl" with a terrible cover. My edition, from your shop, has that brilliant yellow cover by Charles Burns. Was it bad to feel smug?

Oh, good luck. Pre-teenage sleepovers are a series of memories I realised I'd repressed until reading this post. How was the clean up in the morning? I guess nobody went to sleep. Did one girl get left out and picked on? And did they decide to make pancakes at 3am?

ditdot - no smug is fine; you are quite right I think, the Brit edition really does have a stinker of a cover.

Meredith, er, do you know I think I might have slept through the clean up, Sunday morning being officially booksellers lie-in time. I did meet a girl on the stairs at 5.30 when I went for a pee, but as far as I can tell they all got along fine and Justine made them pancakes for breakfast.

Yoga is one of the saving graces I rely on, too, to keep me sane. If that indeed can be done. The jury is currently out.

Sarah - but not in your DM's I trust.