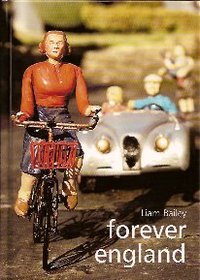 A while back I wrote about Bollocks to Alton Towers a guide to uncommonly British days out. Well another entry that I didn't mention at the time is for Bekonscot model village.

Bekonscot was begun in 1927 by London accountant Rolland
Callingham in the garden of his Beconsfield home. His friend, James Shilcock, from Ascot (hence the name) donated the largest outdoor private model railway in the country, and together with his head gardener, Callingham commenced to build the world's first model village, opening it to the public in 1929.

Callingham died in 1961 and for some 30 years the curators of his folly were inclined to move with the times, modernising every few years or so, and even including at one time a miniature Concord with it's own runway.

In 1992 however, a decision was taken to restore the village to its early 1930s glory and this is how it remains today. Time stands still at a point where it never really existed or, as the boys from Bollocks would have it;

This is the same version of England that...haunts the dreams of Conservative politicians and local newspaper letters page correspondents - a  vision of a nation before some unspecified fall from grace, before the traffic wardens, the media studies lecturers, the new age travellers and the lesbians took over.

Now Liam Bailey has had the brilliant idea to document the lives of Bekonscot's 3000 or so inhabitants in close up, and in so doing, he has fashioned a very magical book. Justine says it reminds her of the world of Stanley Spencer.

Despite the resin nostalgia, all human life is here. From the woman struggling with her umbrella, to the little boy waiting in the doctors surgery with a saucepan stuck on his head, to the stern faced, but clearly perturbed father of the bride, to the games of football cricket and golf, the fairground and the crafty fag taken by the side of the canal - it is difficult not to look at these images without a genuine sense of yearning, for what I'm not quite sure, but it exists nevertheless.

Jon. I think the sense of unspecified yearning you talk of could almost be seen as the measure of Englishness. It is a delicately calibrated yearning that doesn't withstand too much close scrutiny. I too yearn for this past that never was, yearn for it in the same way as I yearn to be reunited with my old friends the Scarecrow, the Tin Man and the Cowardly Lion. Because it's a fiction of the same magnitude, isn't it? This cosy, chocolate box world of affable neighbours and postmen with the time to join you in front of the roaring log fire for a cup of tea from the teapot and a slice of Victoria Sandwich? This stuff may have happened, but so much of it was merely window dressing that drew the eye from all the nasty shit going down in the stockroom. And now the stockroom has moved out front and the nasty shit is right there in front of us, daring to speak its name, and to deny it is there requires that you are either dangerously naive and deluded or live in some Kent backwater with your fingers in your ears going LA LA LA LA LA! Saying that, it would be nice though, living in that world. Aaaahhh.

Further suggested reading would be "Chronicles of a Garden Railway" by W A D Strickland : a fantastic read about creating an OO gauge garden railway in 1950/1960's suburbia. Long out of print ; copies are highly sought after, and appear from time to time in secondhand bookshops.

Ah, oh for those idyllic days when it pissed with rain all summer and we got a good thrashing just for being boys.